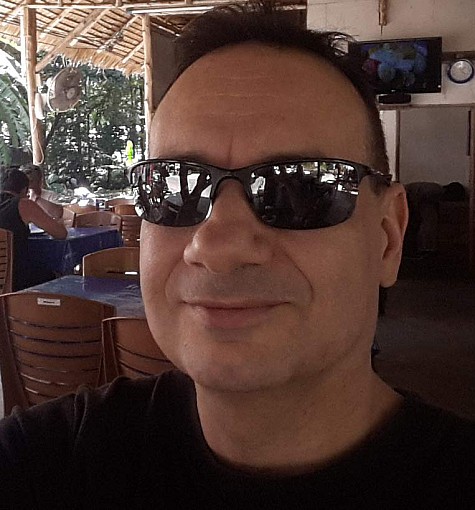 “My music is made with electronic instruments and computers but with the technique of classical music, and the punch of rock music. I try to make an hybrid music that use the technology with the density of classical pieces.“

I‘m born in Montpellier a city close to the Mediterranean sea in the south of France in 1966.
I am from a middle class family and my father, was a handy man specialized in electronic repairs. My grand mother was a famous opera singer in the 30′s. My mother a piano teacher. I started to create music when I was 11 years old. I was walking every morning to go the ‘Garrigues’ college and during this 30 minutes walk I was singing little songs for my pleasure. At this time I haven’t any records or or anything to play or listen to the music, it was in 1976!

Like every teenagers I was fan of Supertramp, Kiss, Trust, Pink Floyd, but also more specifically Mike Oldfield, Vangelis and Tangerine Dream. One day, my mother who was an ex-piano teacher decided to teach piano again and she purchased a brand new upright piano. The piano was sitting in the main room downstairs and the students were coming in our home after school. Still, everyday, I was walking to school and with the time I realized that my brain was not able to memorize all these melodies that were coming spontaneously in my head. I couldn’t remember some of them. I found very convenient to play them on the piano so they were staying longer before I forget them.

After one year I decided that the piano was not a good recording device and for the next 3 years I did 5 piano recording sessions with a little tape recorder my father got from his job to ‘store’ these music pieces so they will not go away forever. For my 14th Birthday my father paid me a Crumar Multiman. It was a very expensive instrument for us. Thanks to him, I recorded hours of creations, I was very inspired and was spending a tremendous time after school on this instrument, playing until early in the morning.

This is pretty much how I learned the piano. My mother quickly understood that I had something different, some kind of gift from God and that she had to do something about it. She first tried to teach me, but I was reluctant. I did the ‘Elisabeth Vidal’ school, and went up to the second year medium grade of the French conservatory of classical piano. I was not a good student, I was not working my piano enough but I compensated with my almost perfect hears… When I was 14th I started to program video games.

At this time I didn’t knew that these programming skills will help me a lot in the future when all the instruments will become software plug-ins! Until my 18th I was very busy, I was doing video clips with an association named Meta Production, having a video teaching class in my school, I was doing music in Bands on the beach in summer or in rock bands on the road, I was programming videogames to the point that I released my first commercial video game ‘Killdozer’ on Atari ST with Lankhor in the early 80′s. I successfully got my bachelor degree, but the didn’t completed my 2 years master in the Paul Valerie University, because I was working now with a new company called Ubi Soft. They paid me all the expenses to move to Paris where I started a video game author carrier. This is when I concentrated my work on studio music, and I gave up doing a music composer. The music became a hobby that I managed to practice as if I was making a leaving of it, while making real money with my programming skills.

Until now I continue to ‘memorize’ my music in my studio. I have more than a little tape recorder, but I often take some old theme created when I was 15 and re-create them with today’s quality standards. There are some good example like for example ‘The Prayer’ from the Cthulhu Album that was in fact created when I was 14… I do not look for fame, or money, I just get these melodies in my head and I play them, store them and release these records to who ever want to buy or listen to them. I’m in a mission of doing that since I’m a kid and I’ll probably do it until I die. I’ve my own style, with melodies and harmonies, inspired from the classical base I got from my education (Beethoven, Bach, Brahms, Albinoni…) and from Mike Oldfield, Vangelis, Jean Michel Jarre, Tangerine Dream, Sakamoto…

Surprisingly, some of my old music from the 1980′s are still good enough to be mixed with my new releases, they are not sounding too old fashioned, probably because, in these times, they were made without trying to follow any specific style, just being proud and happy about a song I’ve made… Now I live in Thailand. It is a choice, France never gave me an opportunity and all I did was because of money raised in the US. After spending 4 years in the US, I came in the conclusion that this place is not good for me, so I moved in Thailand. I am very happy here, and will continue record songs, if I get the inspiration.