Concept Album about a lost soul looking for her identity. 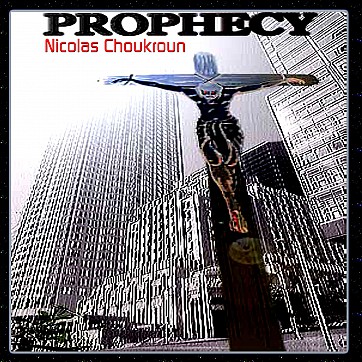 This album has been recorded during a full year, when I was leaving at Bastille in Paris. This is a concept album, where every sample has been homemade recorded. It tells the story of a voice with an human soul who search his place if our world. The prophetic part is related to the cover. See it in the light of what did hapenned the 11th September 2001. My setup evolved with an EMAX II a fabulous machine in these times. Almost everything in Prophecy has been self sampled and played by the 8 Mb ram of this EMU wonder. It was a long and interesting work, all the songs were fitting in this machine memory and the mix was done with Cubase in Midi using the velocity. It took me about one year to finish this album, it is an enormous work with a very little setup! Optimization was the main word. But now when I listen this xx years old album, I've nothing to change.

This is the Introduction of the Album Prophecy. The lead sound is sampled from an old Kawai and most crowd and opera sounds were sampled from live classic opera concerts. This album starts in the medias arena. Technology mixed with antic Roma circus games. Welcome to Prophecy!

This part must be chained with the Part 1. It is a short transition between the speed Prophecy part 1 and the mad No Future Part 1 song. To take your breath before jumping again like a mad. I`ve lost the original part with the marvelous voice of a Roumanian friend. Too bad, maybe I`ll find it again in an old recording and update this song in the future. The lead sound of the solo is a perfect sinus wave (sin(x)) for the math, calculated and injected in the EmaxII.

This song is an hymn to love. It raises progressively until the final apogee. The piano bridge was played by an old italian vintage synth and added one year after in 1992. This music was very succesful at mp3.com when the site was still alive going. The song was close to N°1 in the electronic charts.

This is a very energetic and speed song. In the middle a pan flûte and water bridge calm down everything, but the song start again. The `Voice`give us an ecologic message about polution. `We have to find a solution now`. The part 1 and 2 are made to be chained together.

The second part of No future is even more energetic with a mad lead synth sound. To be heard very loud! The Song is raising until the explosive end. `We have to find a solution NOW`.

Again a very energetic sound, speed and rythm are in the menu. Based on a guitar riff and some samples riped from Kitaro, Vangelis and Mike Oldfield. The crowd sample is back and each bridge is an homage to one of of the artist listed below. To be listened very loud!

My preferred version of Erotheme. Slower, longer, with the introduction played with a weird African flute. Progressively raise up to the end explosion. I used several sounds played with mouth with some ahhhh in the background. This music is cool and magic. The theme itself was inspired by the Rain man`s movie music by Hanz Zimmer.

Rave was a techno style in the 90`when the Rave parties were very popular. My version of the Rave style is of course very personal and a bit more complicated than the basic tunes made just for dancing! Voices were taken from the Dune video game by Cryo.

This pure techno dance song is quite frightening. I used a lot of vintage analog fx. Listen it very loud. Basically this music was created for a game named Trashman signed with Electronic Arts. This game that was supposed going out on Sega Megadrive's console has been canceled when E.A stopped all their developments for Sega for an obscure reason of cartridge manufacturing costs!

With an extensive uses of samples of the very specific sound of Roumanians choirs this songs feature the `Voice` saying `do you really want this life`. this answer is the tittle. A huge work has been done with the percussions and rythms . It is a very dense song with at least 5 themes playing together, a percussion and slapped bass bridge, brass section and a final with a demomaker`s like gimick. A lot of things in only 4 min of music. I've spent at least 6 months to really finish this song.

This version starts with another music theme, cool and fresh, a ballad style and finish in a final explosion with the classic theme of Erostheme.

This last music of the album is a real movie by itself. It explains and justify all the rest of the album. All the different pieces of the Prophecy`s album are the experiences of a voice about our world, the war, the life, the sex, the polution. At the end comes the revelation. All the samples used in this long and film like ending are not here by hasard. I explain. The rythms loops are taken from the Peter Gabriel album `Passion` the robotic voice transform itself to an human voice to shout `I know who I am`. This sample is taken from the movie `Angel Heart`at the time when the main character realizes that he has been manipulated by the devil himself. Finally the calm comes with one of the most beautiful theme I`ve composed, which is nothing else than the first theme of Prophecy Part 1. Loop is lopped. This is one of my prefered music, because of the concept, the research and the meaning of it. It perfectly finish this album.