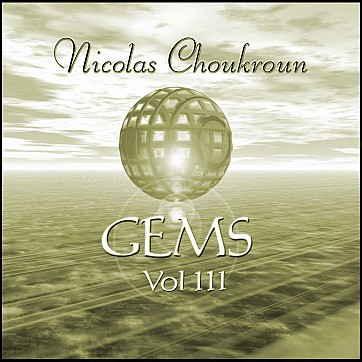 This album is my third one. It is a bundle of instrumentals I made on a 15 years period, between the time I was staying with my parents house, to the beginning of my professional life in Paris in my Bastille studio. Some songs are really old and made with my 4 track recorder without any software, some were done with Pro-24 and an Atari computer, some with Notator on ST at Bastille. Each song has its specific descriptions so refers to these for more information. I gathered this music and made this GEMS series for the record. There are some good stuff in it, some magical moment where an improvisation becomes a complex music score, things that I don't understand about how creativity and inspiration works, like magic.

Like Chinamotion, this music was inspired by Ryuichi Sakamoto. But in this one, I add some European style (the piano and the Trumpet evocation of France and Spain). It is from the same series as Chinamotion, Ubi Song, Great Court, and Genesis. Made only with the S330.

I was working at Ubi soft a game company as a game author. When they asked for a music for using in their video. They asked to Jerund Tell a past video game music star to create a track. The result was really bad and I decided to challenge him and I made this track. it starts with a piano part inspired by Toccata and Fugue from J.S Bach! But it changes quickly to a typical demo maker music style from the 80`! I like specially the saxophone theme in the middle.

This song was made with my s330+Proteus1+M3r setup in the Bastille studio. It is from the same series with Thunder, and Buy or Die. I made a version with a voice with the artist Brigitte, but I cannot find it. Evocation of a revolution in the mind or in fact, up to you to decide.

It is hard to imagine a mode depressing music. To be listened very loud, it is very powerful and disturbing. I have no idea why this music came on the keyboard this day, I am not typically a depressed person, but maybe just a bit of boredom was in the air... Maybe something to do with my girlfriend kicking me out? All this music has been totally improvised like Necro, and others...

A bit commercial on the side, not my preferred. From the same series of Great Court, Thunder, Buy or DieUbi Sound... with my M3r, Proteus1+ S330 setup. I abused of the M3r piano as you can listen. Uplifting and happy. I was mixing the different musical racks on a small plastic mixer in real time. The refrain for example was almost only on the Proteus1, the rest on the M3R, the drums on the S330.

In the same series Eurostar, Thunder... with my M3r+Proteus+S330 setup. You can listen the M3r piano and mandolin presets! This song is a bit more complex with several different ambiances. About the extravagances of the consumerism. This had lyrics once in a time...

Inspired by the music of the French version of the movie of Luc Besson `The Big Blue`, this song is nothing else than a quite exploration in the deep water. Short evolving with a classical harmony in the middle just to remain that it is a Nikko song...