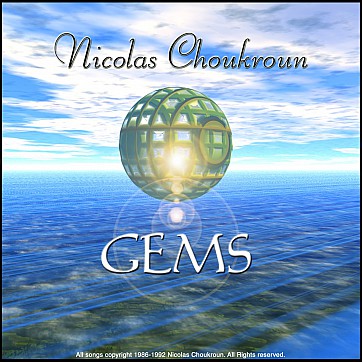 This album is my first one. It is a bundle of instrumentals I made on a 15 years period, between the time I was staying with my parents house, to the beginning of my professional life in Paris in my Bastille studio. Some songs are really old and made with my 4 track recorder without any software, some were done with Pro-24 and an Atari computer, some with Notator on ST at Bastille. Each song has its specific descriptions so refers to these for more information. I gathered this music and made this GEMS series for the record. There are some good stuff in it, some magical moment where an improvisation becomes a complex music score, things that I don't understand about how creativity and inspiration works, like magic.

This song starts with a classical style intro and then changes to an arcade video game music style. This piece was one of the first I created on PC with the PRO24 software. Some `bugs` were in this software and that's why some tracks (the drums) are not playing correctly. Why `The Genesis`? Listen the bridge in this song and you'll certainly find something from a very known and popular International Band!

This song made in the early 80's was been totally improvised. I connected a couple of analog synths, with samplers, and that`s the result. The amazing part is the violin solo playing together with the final piano melody. The horrible part is the detuned stacks of strings I added later on when I was less than inspired... Most of the work has been done by a Roland S330 sampler with some rare gated city drums.

When I was working at Ubi Soft, one team made a game named Bat. Later on, Ubi was working on a promotional video with an English guy. I happen to host these 2 guys in my room at Bastille and let them play in my studio. One of the guys was Jeroen Tel, a superstar musician for video games at this time. Both were working on the Iron Lord music. I took the challenge and made a 3 music to be on the video (Tennis, Blade Runner and Ubisound) all in the Gems series. The deal was that I would let them use my studio, and in exchange I will have my music in the video. At the end, I was screwed, my music removed and as a revenge I steal the betacam master and hide it so that they could not release the promotional video. Blade Runner is the song I made to illustrate the game B.A.T.

Necro is a song I`ve improvised when recording live. It is one of the most incredible moment when you just play something and all of a sudden, inspiration comes and a full tune just pop out from your head.. Both dark and emotionally powerful, it sounds close to what Vangelis was doing at the same period. The themes is very classical. The overall was composed with the same setup as Travelling and Chinamotion.

This song was made while I was in Paris, with a setup made of a Roland S330, an Emu Proteus 1 and a M3R... A lot of songs in the GEMS series are made with this setup. I was doing everything in MIDI and mixing right into a Mackie 4 track. This song has a bit of a soap opera, I like the melodie.

I was thruly inspired by Ryuichi Sakamoto and the album `Illustrated Musical Encyclopedia`. Created almost at the same time as Traveling, these two songs have in common a Japanese feeling. Note that the weird trumpets and the hi-percussion passage are clearly taken from this great Ryuichi`s album!

This song has a very special place in my memories. First is was the first orchestral like piece I've made. Second it is also the first song I've fully improvised while it was recording. There is something special in this song, something natural and impossible to reproduce even with my latest modern studio. This strange alchemy mixed with something magic, coming from nowhere? How I did improvised this song with only an ESQ1, a S330 and a tape recorder? I choosed this name because the song evolves until the final explosion, like the Ravel`s Bolero. I remember that I was working on some games in Montpellier with Michel Ancel when I show him this song, he really loved it and later on purchased my S330. Last time I saw him he reminded me this song, so I guess it was quite impressive in 1985!

Inspired by the music of the French version of the movie of Luc Besson `The Big Blue`, this song is nothing else than a quite exploration in the deep water. Short evolving with a classical harmony in the middle just to remain that it is my song...

Astaskaroth what does it means. Well it is more or less what the robotic voice say. This music was created after having seen a J.M Jarre convert live at the TV. I was upset by the bad quality and I`ve decided to create my own J.M Jarre style! This music was improvised, then the voice has been added over the first recording. this is a very progressive song in the same style of Bolero for example but with a better recording quality.