Concept Album about the Myth of Cthulhu. 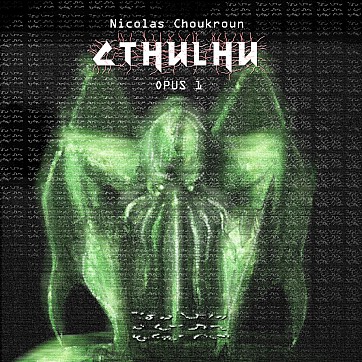 Cthulhu is an album about the Work of HP Lovercraft. Written between 1998 and 2000, its theme is linked to fears of change of century, disasters. The Lovercraft Creature is well known to purists and lovers of role-playing games. The whole concept, themes and the musics are organized like a concept album. If most of the tracks are rhythmic, some are particularly distressing.

In this introduction, the narrator, exposes the meaning of the album. With an orchestral mysterious background the main themes are played with piano and guitar. Be ready...

This song describes the message of Cthulhu and the crowd that arrives from all over the world to celebrate its coming. Cthulhu has the power to hypnotize people while they sleep. Millions of people from all races, and animals are coming to assist to the event.

Imagine a Fashion show. Imagine this sound in background. Thats the way it was made, and the way it sounds. Great solo violin to make the break with the rather techno feeling.As the title say, it is a short place before the main course! Just using some of my favorite instruments to create an abstract weird song.

Another trip, but this time you are in the desert. The sun burns and there is sand all around you.everal computer generated voices are talking for Cthulhu. The Princess voice comes from Isabelle Dahark a friend I met in Paris. This song is very powerful with heavy drums.

I like this song. I use guitars, piano, choirs, orchestra, and abstract noises at the end. This song is in the style of Prophecy Part3. It is a movie by itself. The song progressively change to a final explosion when Cthulhu arrives in the real world.

A Beautiful orchestral piece with full orchestra and choirs. Cthulhu is here and stands. The world burns, and people suddenly realizes that they have assisted to the end of the world. The end of the pieces some crazy monks are coming from the deep while the children's choir try to resist...the hell is here : Agnus Dei.

This song is really frightening. Based from the sounds from real Voodoo celebrations, it is a pure abstract music. It describes the hell on hearth the total anarchy with daemons and monsters killing and dancing everywhere. Everything is made in this song to create a really weird atmosphere!

Based on a piano theme I`ve made when I was 15 years old, I`ve re-arranged this piece with Enigma in mind. I`ve used an old Thai month and with help of the orchestra tried to describe the procession of the good against evil. As you can see the 3 continents music have a role in this album... Europe/US are defeat by the Africa and saved by Asia. Prophetic?

Based on a cool piano theme, this song has a solid rhythmic background. Hope comes back again.

In this techno song with jungle rhythms our heroes will fly off the wings of gold . As you can see the different voices in this album have a role. The computer generated voice is for Cthulhu, the real voice for the hero and Cthulhu when he has hypnotized Princess. The woman voice is Princess of course.

The final part of Cthulhu is a very optimistic song with an Opera style singer and a techno style. The Opera voice has been totally re-synthesized. Credit must be given to Amelie Glenn who gave her voice for this song.